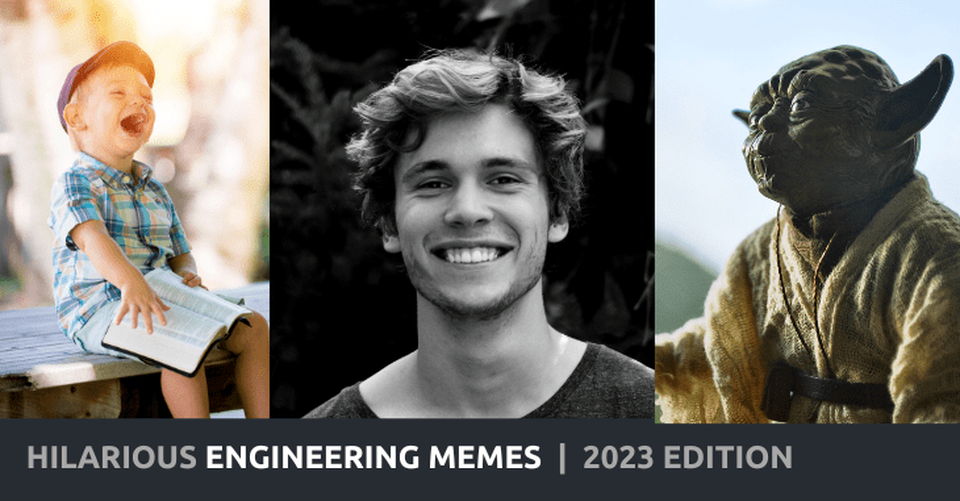 Last Updated: March 16, 2022
This page is for all the engineering students, sweating it out at the daily grind of becoming an Engineer. Take a break and have a laugh at this updated list of engineering jokes, memes and videos ....

A 12 year old boy and his father are new to the Western World and entered a mall for the first time.

The boy was amazed by everything he saw, but especially by 2 silver doors that move apart and then slide back together again.

The boy asked, "Dad. You're an Engineer. What is this?"

The Engineer (never having seen an elevator before, but too proud to admit it) responded, "Son, this is an elevator. I'm very familiar with this because I'm an Engineer."

While the boy watched with amazement, a fat old lady moved up to the moving walls and pressed a button.

The walls opened, and the lady walked between them into a small room.

The proud Father started "See son, this will take her to the 2nd floor, then back down here to the 1st floor. I know this because I'm an Engineer"

The doors closed, and they watched as the numbers above the doors light up. From 1 to 2, then 2 to 1.

Finally the walls opened up again and a gorgeous 24-year-old blonde stepped out.

The Father, not taking his eyes off the young woman, said quietly to his son...

Severe Sarcasm, Funny But So True

A man is flying in a hot air balloon and realizes he is lost. He reduces height and spots a man down below. He lowers the balloon further and shouts: "Excuse me, can you help me? I promised my friend I would meet him half an hour ago, but I don't know where I am."

The man below says: "Yes. You are in a hot air balloon, hovering approximately 30 feet above this field."

"You must be an Engineer," says the balloonist.

"Well," says the balloonist, "everything you have told me is technically correct, but I have no idea what to make of your information."

The man below says, "You must be a planner."

"I am," replies the balloonist, "but how did you know?"

"Well," says the man, "you don't know where you are, or where you are going, and you have made a promise which you have no idea how to keep. The fact is you are in the exact same position you were in before we met, but now it is somehow my fault."

The Soon To Be Angry Bartender

An Engineer walks into a bar and says, “Give me a beer before the problems start!”

The Bartender senses pain but obliges.

The Engineer drinks the beer and then orders another, “Give me a beer before the problems start!”

The Bartender gives him another beer, but is visibly concerned for the Engineer.

After the 6th beer the Bartender is totally confused and asks the Engineer, "Hey, when are you going to pay for these beers?"

Too Engineer for His Own Good

Three men were sentenced to be executed by guillotine; a priest, a Muslim, and an Engineer.

First was the priest and he asked: "Can I face upwards to see Heaven and my Creator?".

His wish was granted, the blade fell, but stopped 1/2 inch from his neck, sparing his life.

The executioner replied: "Since the guillotine has spared you, so shall be your life. You are allowed to leave."

Next was the Muslim and he asked:  "May I also face upwards to look to Allah before my death?"

Again the guillotine stopped just short and his life was spared as well.

The Engineer was last and he too asked to face upwards given what happened with the first two.

As he lay there, he looked up at the mechanism and said: "Aha, I see the problem!" See where the rope has jumped out of the pulley groove!"

Such a Shady Coincidence

A Lawyer and an Engineer were fishing in the British Virgin Islands ...

The Lawyer said: “You'd never believe it but I’m here because my house burned down. Everything was destroyed by the fire. But my insurance paid for everything."

“That’s quite a coincidence," said the Engineer.

“I’m here because my house and all my belongings were destroyed by a flood, and my insurance company also paid for everything.”
​
The Lawyer looked somewhat confused.

“How do you start a flood?"